For most women, when we say that we want to do the beauty treatment or a skin treatment, it means that we want to make our skin super healthy, well-moisturized, less wrinkled, shiny or even glowing. We will do any types of skin treatment steps from beauty experts or beauty bloggers or beauty vloggers to gain those wishes. I did that too, but I realized that sometimes we ignore the small thing that should considered and in fact, it can annoys our look at the end. What is that? The blackheads. Based on the article on headline.com, blackheads are small bumps that appear on your skin due to clogged hair follicles. It can be found in some parts of the body, such as at the back, chest, neck, arms and shoulders. In my case, most of blackheads appear in the nose and chin areas and those are really disgusting because they usually appear in groups within one area. The blackheads appearance also might tell the word that we don’t look after our skin properly. The annoying part would be the blackheads are very hard to be covered by using any type of concealers, layers of foundation, a thick layer of face powders or any type of the best makeup.

Previously, I used Facial Treatment Essence from SK-II for years and it helped to remove blackheads perfectly after 3 months of usage. I couldn’t see any blackheads left in my nose area. When I stoped using this product 2 years ago, I saw the blackheads appear again in the nose area. It means that this product can stop the blackheads appearance in 2 years after stopping the product usage. Another thing is I have to use the other product to remove blackheads only as I won’t use the SK-II facial treatment essence because there are already many skincare products that I use currently. Therefore, I decided to use Biore Cleansing Strips Pore Pack. 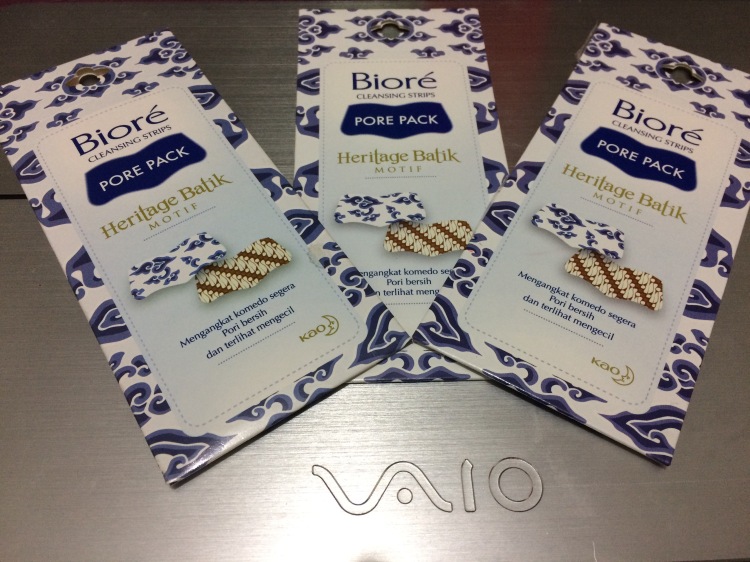 I used this product years ago and I felt that the formula that contain in the strip was too solid and sticky. It made me hard enough to release the strip from the nose area. However, I think the formula is changing to the lighter ingredients. Because the strip can be released easily and 90% of blackheads can also easily removed without any pains.

It can remove blackheads immediately, clean the pores and minimize the pores’ sizes. It is also easy to be used to remove the blackheads from inside the pores.

In the previous packaging design as well as the strip were too simple with a black color dominated. However, in the black color, were able to see how many blackheads sticked in the strip during removal. I like the design of the new packaging though. It is not the new packaging but it is the additional design of the packaging itself. The packaging design and the strips are illustrated with Heritage Batik motif. It is very creative and unique. It shows one of the Indonesian culture, which is Batik, in the cleansing strips. The packaging itself is made from thin cardboards and each of it contain 4 strips with different designs. The hygienist part would be the sachet pack for each strip. It means that the strip will be clean enough before usage.

After cleansing the face, keep the nose area or the area that you want to remove the blackheads wet. The strip cannot be sticked in the dry area. In the nose area, stick Biore cleansing strip pore pack in the nose and press downward to be sticked perfectly. Leave it for about 10-15 minutes and after you feel the pore pack stiff and dry, you may take it off from the sides of the nose to the center. You can see thousands of blackheads stick in the pore pack strips.

How many times to use this product per week?

If I see the note in the packaging, it is stated that this product can be used one to two times a week. Based on my experience, I used this cleansing strip pore pack every Sunday, which is once a week. It is to avoid the dryness in my skin. However, if the blackhead appear aggressively, I will use the pore pack twice a week, which are on Wednesday and Sunday.

What should we avoid?

There are some points that we should avoid while using this strip. It is also to avoid the irritation of the skin after usage.

Where can you get this product?

The thing that I like about this product would be it is really easy to get from supermarket, mini market, pharmacy, and even in the small stores.

Definitely YES. I just bought this cleansing pore pack last weekend in the supermarket. They sometimes offer the discount of buying 2 packs get 1 pack.

Do you have another way to remove your blackheads?

I am just a girl who loves all beauty stuffs and traveling. And I am really addicted to a hot cappuccino. View more posts